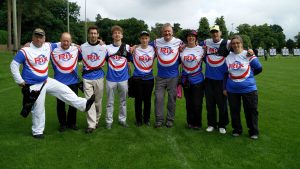 Nine members from Norfolk clubs travelled to Lilleshall in Staffordshire to compete on behalf of Norfolk Archery in the intercounties team championship on 25th and 26th June 2016.

The spirits for the team were high all weekend, with the ladies compound progressing furthest in the team head to head’s by reaching the ¼ finals.

The team enjoyed a great meal together with much joviality on Saturday night and it gave a perfect opportunity for some great team bonding over a game of Flick The Coin/Waitrose token!!!!

On Sunday it was great to see the effort put in by the team members who continued to shoot despite some appalling conditions. All members except team manager Rachel, who had to retire due to injury, kept shooting until 18.15 over three hours of which were in constant rain!!!

Two members of the team, Mark Webb and Sally Palmer, achieved master bowman scores for their respective WA1440 rounds and others gained personal best scores despite the weather.

Norfolk Archery can and should be very proud of the team who represented them on this occasion.